At one time or another most DMO executives and their local partners have considered enlisting the services of a celebrity (however defined) native son or daughter to pitch their destination. “They’ll do it and they’ll do it for free because they’re from here” are the typical expectations.

My experience has been:

This paradigm would now appear to be changing. It seems that some high profile destination brands have decided that the risk and investment in a celebrity tourism ambassador are worth it in order to take their brands to new levels of affinity as the competition for attention and revenue continues to escalate:

New York City (Taylor Swift): The Big Apple hired her even though she’s not a native daughter nor does she live there. She does have over 70 million Twitter followers however. Perhaps it was “brand defense” given The Donald’s continued reference to his NY heritage.

Australia (Chris Hemsworth): Tourism Australia hired him to follow in the steps of perhaps the world’s most famous tourism ambassador, Paul Hogan. To a whole generation of travelers and more, Crocodile Dundee was the embodiment of all things Australia. It will be interesting if consumers come to associate Mr. Hemsworth as much with Australia as they already do with Asgaard. 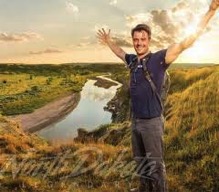 North Dakota (Josh Duhamel): North Dakota is one of the US’s least visited states and its most widely-known story-line of late involves a wood-chipper in the academy award-winning movie Fargo. Hiring native son Josh Duhamel to tell tales from the “Peace Garden State” appears to be working with a reported 20% increase in visitor guide distribution during 2015. No word on his impact on wood-chipper sales.

Tokyo (Godzilla): The appointment of Godzilla will have boomers reminiscing about their exploits at drive-in movies but I am not sure how it extends the Tokyo brand story. It was brilliant, however, in terms of generating press releases and photo ops. At least Godzilla’s not at-risk for inappropriate social media behavior.

California: Visit California’s “Dream Big” commercials use numerous A-B-C list Hollywood celebrities to tell the California story. For California it not only makes sense, but it’s totally expected given the Hollywood DNA in the overall California brand and lifestyle. It’s an essential and unique brand truth that is hard to ignore. Not surprisingly, no sightings of the Governator.

So the question is: does the investment in the use of celebrity tourism ambassador move the needle (however defined) for a destination? To get a very basic and organic answer I did what has become the go-to first-step for people: I asked Google…or rather, I used Google Consumer Surveys to ask 500 people in the US the following question: “How much does the appearance of a celebrity tourism ambassador in marketing campaigns influence your decision to visit a destination? 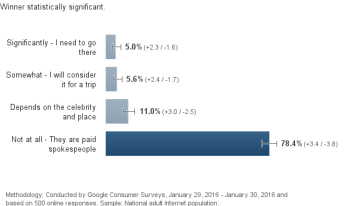 Overall, just under 11% of the population are “moved” by the existence of a celebrity tourism ambassador, with an additional 11% in the gray area of uncertainty. Peeling back the data a bit, the impact of a celebrity tourism ambassador declined slightly as household income rises. In a world where the influence of peer-to-peer travel recommendations is skyrocketing while the influence of traditional placement advertising plunges, this result is not at all surprising.

Time will tell if any of the recent investments in celebrity tourism ambassadors will actually amount to anything more than a press release and a photo op. The only strategic reason I see for enlisting a celebrity tourism ambassador – simply put — is to have their well-known story and tribe of followers attached to your destination’s not-so-well-known story to create a bigger and better story with people that don’t know your destination’s story. In North Dakota’s case, it might be exactly what the destination is looking for as recent campaign results bear witness to. But for more widely-known destination brands and stories…you have to wonder about the ROI.

Let’s face it; signing-up a celebrity with a big story and big tribe of followers to extend yours is hardly destination marketing magic. You just need a telephone (to call an agent), a lawyer to write-up a complicated contract with lots of protection in it and a check with lots of zeroes on it. But as the data above shows…you’re unlikely to initiate a stampede of visitors to your destination. Except of course if you’re using Godzilla. 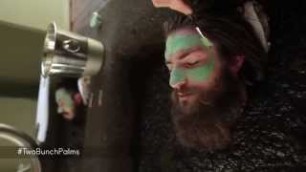 The magical thing for DMOs to pursue is to find and share the smaller, more authentic stories about real people doing incredibly cool things in the destination that anyone can have access to. The Greater Palm Springs CVB is producing some great high-energy video content about a myriad of activities with that expand/enrich their destination’s story. This one has already had over 400K views.

If you create and share enough of the authentic and compelling stories that make your destination unique, pretty soon you’ll be the ones attracting the celebrities to your destination. But this time you won’t have to pay for them.